What’s in a Name?

To a certain extent, we all have our destiny encoded into us – medically at least – as Crick and Watson discovered when they revealed the structure of our DNA.  Some people also believe that our future is written in the stars, or at least those in the sky at our moment of birth, which is why Astrology is so popular.   But what of our name – is something coded into that as well? Those of you who do Pub Quizzes will have encountered the round where the quizmaster produces a list of anagrams of celebrity names and asks us to identify them.  We are amused by some, for example: ‘occasional nude income’ reveals Madonna’s full name (Madonna Louise Ciccone), ‘go gets beer’ becomes George Best and ‘O Dear, I’m a gonad’ is Diego Maradona.  Some others may be a little more profound, such as ‘old west action’ (Clint Eastwood), ‘got St Leger tip’ (Lester Piggott)  or ‘genuine class’ (Alec Guinness).   But it’s the ones that are a little too close for comfort that cause us to raise an eyebrow.  Who would have thought that the anagram for Osama Bin-Laden would be ‘a bad man – no lies’? END_OF_DOCUMENT_TOKEN_TO_BE_REPLACED

More and more home appliances are now being developed with some degree of intelligence, allowing us to communicate with them via our Smartphones.    We can tell our Sky Box to record the footie, check what the kids are doing while we’re out for the night, even boost the temperature on the central heating when there’s a cold snap, so that we arrive home to a nice toasty environment. Now LG have introduced a new Homechat function that allows you to talk to your Fridge, via text, to find out what you have in there.  There’s even an in-built camera that can take pictures of the shelves and automatically order new provisions for you when you run out.    All a bit gimmicky, maybe, but what will happen when these components are developed to the point where there is enough ability for a proper dialogue?  Just how difficult could that conversation become….. END_OF_DOCUMENT_TOKEN_TO_BE_REPLACED

On first examination, this title may sound like a weird attempt at finding a Googlewhack, but is actually a subject-combination encountered over the last couple of days that stirred memories from of my schooldays.   That echo from the past was the course name, cybernetics, that appeared on our school timetable at the start of my first term in the sixth form back in September 1966.

It all started one evening last week when I had a discussion in the pub about sex-education in schools, during which I related my experiences all the way back in those cybernetics lessons, a name that suggested, at the time, that the lessons would be purely about logic gates, but somehow the other two aspects became features as well from time to time.  The next day I watched a Sylvester & Tweetie Pie cartoon with my granddaughter, during which the puddy-tat was distracted by a laser-pointer brandished by his yellow nemesis, and the serendipity was completed the day after by the receipt of an e-mail from a friend with a link to a support page from Google on how to set-up Gmail contacts.  OK, now I have confused you. let me explain. END_OF_DOCUMENT_TOKEN_TO_BE_REPLACED This generated so much interest that Mr Lewis’ business grew and grew until he felt he just had to make a film about it and, as films have to have a title song, he enlisted the help of a famous songstress to sing it for him.  Mr Lewis played the song in his store, and it so enchanted the people who heard it that they wanted to buy their own copy.  So Mr Lewis manufactured a single that became so popular it topped the Hit Parade.   So where, you may ask, does the Passport come into this.  Well to tell you that part of the story, I need to take you far, far away, to another land – Somewhere Only Jobsworths Know. END_OF_DOCUMENT_TOKEN_TO_BE_REPLACED

There has been much wailing and gnashing of teeth since Pope Benedict XVI announced his resignation, through ill-health, from the job of being God’s chosen representative on earth.  The act itself may have come as a surprise, but not the reaction; after all, if any position should be considered a job for life, surely it is that of Pope. 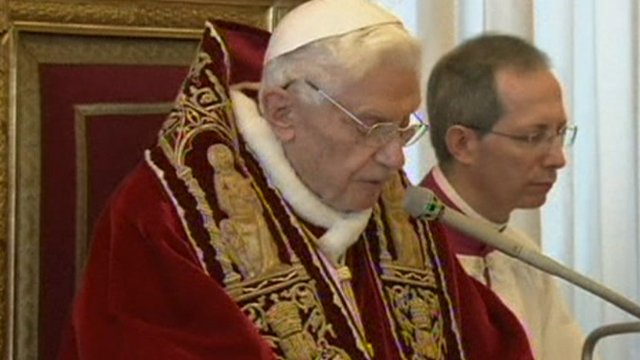 However, in these days of career plans and exit-strategies, and with the most popular method of removal in their early days, that of martyrdom (favoured by half of the first sixteen incumbents) being no longer considered  politically-correct, it was obviously time for the church to modernise its HR policies.  END_OF_DOCUMENT_TOKEN_TO_BE_REPLACED