On first examination, this title may sound like a weird attempt at finding a Googlewhack, but is actually a subject-combination encountered over the last couple of days that stirred memories from of my schooldays.   That echo from the past was the course name, cybernetics, that appeared on our school timetable at the start of my first term in the sixth form back in September 1966.

It all started one evening last week when I had a discussion in the pub about sex-education in schools, during which I related my experiences all the way back in those cybernetics lessons, a name that suggested, at the time, that the lessons would be purely about logic gates, but somehow the other two aspects became features as well from time to time.  The next day I watched a Sylvester & Tweetie Pie cartoon with my granddaughter, during which the puddy-tat was distracted by a laser-pointer brandished by his yellow nemesis, and the serendipity was completed the day after by the receipt of an e-mail from a friend with a link to a support page from Google on how to set-up Gmail contacts.  OK, now I have confused you. let me explain.

As I related to the pub-gathering, being pupils at a specialist Technical School at the dawn of the age of mass-computing, it was not surprising that the basics of computer logic should feature in our education. However, like all of us in that class in the early stages of the permissive age, I still don’t really know if the title was a clever way of clandestinely introducing sex-education into a curriculum compiled by retired PT instructors who had ‘fought a bloody war for the likes of you’, or that the sex-talks were something that just happened when the headmaster decided to do some direct teaching of a group of 16/17 year-olds who simply couldn’t pass-up the opportunity to discomfit an unpopular individual.

There were some quite-interesting periods when we did learn about NAND Gates and the like, which certainly later helped those in our number who went on to have distinguished careers in IT.   But it is the image of that somewhat-embarrassed figure standing before the class during discourses on teenage sexuality that remained in the memory, and with which I was able to regale my companions in the bar, the younger of whom are themselves struggling with the modern concept of primary schools exploring these aspects well before parents themselves are ready for the classic ‘birds and bees’ discussion.

Cats were regarded by our headmaster as the most perspicacious of domestic animals, and he would use them as an illustration to the solving of logic problems.  The quid-pro-quo that he paid for this was the occasionally hijacking of it by the class for other comparisons.  Not being a cat-lover, I must admit to having struggled with seeing them as an illustration of common sense personified.  Yes, their mercinary attitude in meting-out just-sufficient affection to their owners to guarantee the continuation of their meal-ticket may be something that would be admired by the type of misanthrope who could find any excuse to summon a pupil to his study for a dressing-down at the drop of a hat.  What is lost on me is quite how that cold logic also manifests itself in their endless pursuit of a red dot being  guided by someone making no secret of what they are doing.   It was this aspect that was used in the Sylvester cartoon with such hilarious results that it turned my 4-year-old grandchild into a giggling heap. 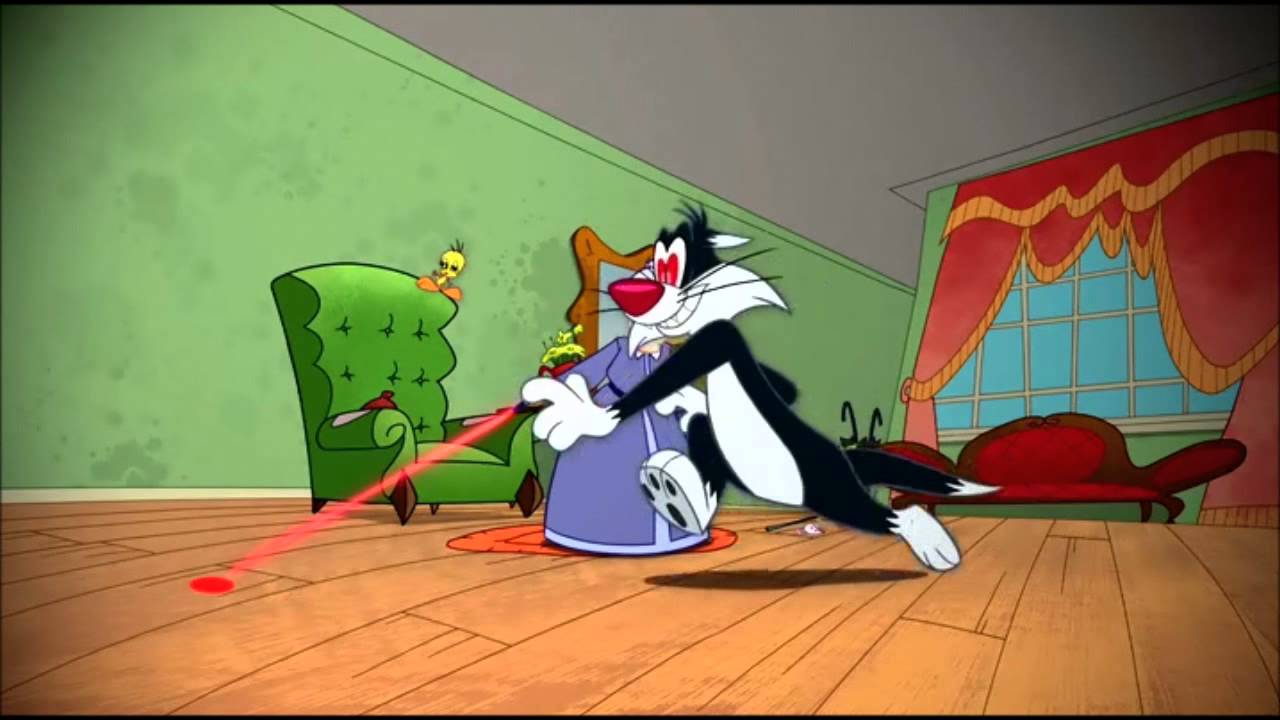 Back in the ‘nineties and early ‘noughties, I managed projects that brought me into close working relationships with computer programmers, or whatever they like to call themselves these days.  I found the majority to be diligent and hard-working – most of the time.   What was infuriating was their propensity on odd occasions to disappear off at a tangent, at a crucial time in a project, chasing the red laser dot of an idea or code change that was not part of the original brief.  On one occasion I sat next to a developer in an office in Australia awaiting his completion of a software update that I was to bring back to the UK on a flight leaving that day.  Having watched him coding relentlessly for about an hour, I used a coffee-break to ask how much longer it would be before he handed me the disk to take with me, bearing in mind we were an hour from the airport and my flight left in four.  His reply was that it would only take five minutes, once he had completed what he was doing – which transpired to have no connection with my update, but was something else he had noticed whilst scrolling through the code looking for the bit he needed to amend for me!

The most difficult aspect for any project manager to control, however, was the inclusion of ideas that were not part of the original specification.  Developers are creative people, and it this very quality that has given us some of the most useful gizmos of modern life.   It is great when such ideas turn into money-spinners, but this tends only to happen in a small percentage of cases.   The vast majority result in the question arising during an overbudget meeting: “why did you spend a week adding that, it was not part of the customer brief?”   The answer generally comprised of a shrug accompanied by: “I thought they might like to have it,” not an answer conducive to the maintenance of low blood pressure.

Which is where the receipt of a link to details about e-mailing Google+ connections comes into the story.   This particular friend is a great source of the bizarre on the web, but neither of us is much into social networking, which is why I found the subject matter intriguing.  What the page provides are instructions on how to ally e-mail traffic through Gmail to connections in Google+.   This is straightforward enough, particularly regarding receiving e-mail from existing contacts in the address book who are also Google+ connections.   Where it becomes a little sinister is when it starts dealing with those who are not in both categories.

Under the heading ‘Emails from outside your Google+ circles’  it explains how to decide whether to receive any future emails from that person.  Bearing in mind that Google claims to have half a billion active members on its social network, but industry-watchers assess that the vast majority of those are only watching YouTube when logged-in, it is probably fair to say that a relatively small percentage of anyone’s address book would also be a current Google+ connection.  So any new Google+ user is faced with a lot of decision making every time they press their Gmail send/receive button, some of which may be made in error with disastrous results downstream – i.e. no mail from that contact would ever appear in their inbox again. 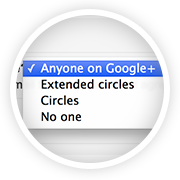 However, it is the final section headed ‘Control who can email you’ that contains the most bizarre aspect.  Here it explains how to implement global settings in Gmail, and shows a dropdown that includes just four choices; the last of these is ‘No one’.   In other words you can set your Gmail account so that you never receive an e-mail  from anybody ever again.  This is something that many of us must have considered at some stressful point in our lives, only to dismiss as highly impractical after a period of calm reflection.

What I would really love to know is who at Mountain View was playing with the laser-pointer when the developer of this dropdown was deciding what options to include.