An article written in March 2008 on the World Issues website following publication of a scientific report that concluded Global Warming was not to blame for the 2007 floods in the UK.  It looks at the consequences of following scare predictions and compares current climate thinking to the millenium bug:

So it’s official, the disastrous floods in the UK last year were NOT due to global warming.  That is the conclusion of a report published by the Centre for Ecology and Hydrology, in which it says “The river floods of summer 2007 were a very singular episode, which does not form part of any clear historical trend or show consistency with currently favoured climate change scenarios”. 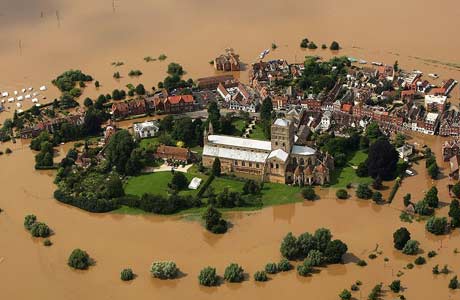 Instead, the report concludes that the main cause was extended rainfall during the early summer that caused the soil to become saturated. When the torrential downpours occurred later in the summer, the ground could not absorb them as easily as it could have done had the soil been dry, as it normally would have been at that time of year. This, combined with ill-considered housing development on flood-plain land over the previous ten years, produced an abnormal set of conditions in those areas affected, and nature simply did the rest.

More importantly, the report confirms that records clearly show there were consistently higher summer rainfalls during the nineteenth century, so whether the planet is warming-up or not, it certainly is not causing drastic climate change in that category.  On that basis alone, the doom-mongers were entirely wrong in suggesting that it was, and therein lies the problem, I’m afraid.  It is a bit like ‘the boy who cried wolf’ – regardless of what basis there may be to claim global warming, climate change, or whatever handle you want to put on it, the more the self-appointed soothsayers try to align every abnormal occurrence with their theories, the less likely they are to be listened-to once gaping holes are found in their arguments, as has been shown here.  So right or wrong, we will trust their forewarnings less and less.   Read the full article