A Tale of Two Lambo’s

A report on the Arsenal v Ipswich Town game on April 21st 2002 for an e-mail newsletter:

This may sound a bit convoluted, but life’s like that, and it just proves the old maxim that its not what you know, but who you know that  matters!   Due to a surprise phone call from a business friend on Saturday and the generosity of one of his staff, whose daughter happens to work in Arsenal’s Press Office, my son and I found ourselves unexpectedly with seats for Sunday’s game at Highbury against Ipswich. 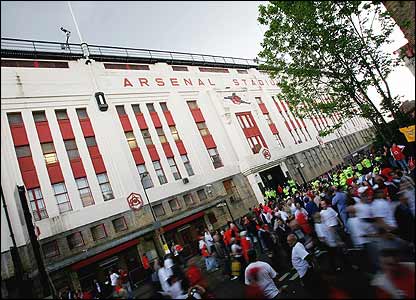 It being a nice sunny day, we decided to take the Little Red Roadster to Hammersmith and catch the Piccadilly line all the way through to Arsenal.   Another uneventful drive using cruise control most of the way (an unusual achievement in this Country, it has to be said) begs the question yet again of how our darling government intends to get us off the road and onto the rails.   Added to that, we had the dimension of hood-down motoring all the way, regaling the surrounding countryside with an assortment of choice music courtesy of 100 watts of Bose power.

Having caught the tube, and strangely resisting the temptation of stopping at Piccadilly for the prerequisite half-hour in Tower Records, we arrived at Highbury just before three, which gave us plenty of time to collect our tickets and visit the Arsenal Shop, where surprisingly there were no samples of the new shirts on display.  Arsenal have just announced a new sponsorship deal with MMO2, BT’s newly-devolved mobile phone arm, which is going to be worth about £2m a season and will have them sporting a chemical symbol on their shirts from August.   The new home shirt is definitely Arsenal, but leaning towards Ajax in design, while the away one returns to the two shades of blue from about five seasons back, and is VERY smart indeed.

Walking back to the entrance for our seats high in the East Stand, it is easy to see why this club so desparately needs the new stadium.  Highbury must almost be old enough to qualify as a listed building, and the contrast with Old Trafford could not be more stark when visiting the two so closely together.   That’s not to say the place is tatty, far from it, it is just of a different era.   Indeed the high cost of maintaining such a relic to keep it in such good order must go a long way towards justifying the funding for it’s replacement.   Although our seats were in a fabulous position about halfway inside the Clock-End half, as we sat down we were very conscious of the pillars holding-up the roof that was covered in pigeon netting to stop them, unsuccessfully in one case, from roosting in the girders beneath it.

What is not out of date, however, is the pitch, looking absolutely magnificent in the spring sunshine.   No wonder this is a team of ball players, who wouldn’t want to play to the max on such a surface?  Yes Old Trafford was good, but this is in another League, and it was interesting that the programme contained an article on the design of Ashburton Grove detailing how the architects have been working closely with the Ground Staff at Highbury to get the design right as far as allowing the correct amount and type of light to reach the new pitch there.

When the teams came out to warm-up, it did not take long to see the difference in League positions between them.   You would expect both teams to be up for a game like this, with the home side needing to win to keep their Championship run on the go, and the visitors also needing realistically three wins from their last four games to stand any hope of survival, indeed to even catch some of those above them.    But as the Arsenal players jogged and sprinted about on their toes, the Tractor Boys slouched around lead-footed.    With a couple of exceptions, Finidi George and Marcus Bent, it was like watching my old Under-15’s going through the motions of training on a Friday night.   If they believed they were already down, and they were just waiting for the queue of Premiership managers to form outside the dressing room, then they will surely have a rude awakening, because if I was in the transfer market I wouldn’t touch one of them on the evidence of the warm-up alone!     I immediately felt very sorry for George Burley, and for the fact that he may lose his job because of such a bunch of wasters.

And so to the game.  From the kick-off it was nearly ten minutes before anyone in a blue shirt came remotely close to touching the ball with any evidence of intent to do something positive with it.    In that time, had Arsenal had their shooting boots on straight, they could easily have been three or four up, but as often happens they couldn’t finish some breathtaking approach work.   Unsurprisingly, the Ipswich player who broke the spell was Marcus Bent, who had already covered more than half the pitch, making runs and moves into space only for his teammates to fail to see him.   When he found himself in a position to go at the Arsenal defence with the ball actually at his feet, he was immediately surrounded by three defenders with the nearest blue shirt fifty yards away.

It was like being told by a colleague in the office that there were two Lamborghini’s parked in the car park.   On leaving the building to investigate, you are confronted with two of these Italian machines, one a gleaming red V12 Diablo with white leather interior, the other a muddy pale blue tractor for which the marque is as famous in Europe as it is for its Supercars.

As the first half progressed, Arsenal sent wave after wave of attacks forward to be confronted by a stubborn blue wall of at least nine defenders. The nearest they came to breaking down this resistance was a sharp Thierry Henry strike that clipped the bar after a finger-tip save from the ‘keeper.   Then with the half drawing to a close, suddenly Finidi George broke down the right and centred.  Marcus Bent drew the defenders away from Martin Reuser who was unmarked at the far post, against which he headed the ball with Seaman stranded.   It could so easily have been one-nil totally against the run of play, but it would have been way more than the visitors deserved for their poor showing.

The second half started as the first ended with a rush of Red and White piling towards the North Bank in search of the inevitable score.   Bergkamp hit the post with another wonder-goal attempt, Henry hit the bar again, as did Freddie Ljungberg.     The two vehicles had left the car park, but unfortunately the tractor had done so first and was now proceeding slowly down the middle of the narrow road with the Diablo frustratedly behind it trying to find a way past.

Arsenal began to lose their way a bit, as is usual when a side has had probably seventy percent of the possession with nothing to show for it.   The odd pass went astray and Ipswich seemed to gain some enthusiasm from this, although they never did anything positive with any advantage they gained.    The Tractor’s Turbo had begun to speed-up its progress, whilst one or two of the Diablo’s plugs were beginning to oil-up.

Then, with a quarter of an hour left, a string of corners at the North Bank end raised the volume coming from the home fans and after a period of constant pressure in the box, Freddie Ljungberg, standing on the penalty spot, spun on the ball and guided it past the stranded ‘keeper into the net.   The place exploded with noise;  the Diablo had spotted a wider piece of road and had blasted past the tractor in a flash.

Five minutes later a cross from Grimandi on the right found Ljungberg unmarked six yards out to head goalwards.  The ‘keeper parried it, but only straight back to Freddie who bundled it home to complete the job.   Thereafter Arsenal played keepball, stringing together thirty-plus passes at a time .   The visitors barely looked like they even wanted to get the ball back, and eventually the Referee was virtually bored into calling a halt to this uneven contest.

As the final whistle blew we caught our last glimpse of the bright red supercar disappearing over the horizon towards Europe, all twelve cylinders fully back in tune with the twin turbo’s singing away, while the tractor slowly turned-off, popping and banging in the direction of places like Grimsby.

© 2002 CepenPark Publishing Ltd except for linked images hosted on third-party sites.
For image source details hover over the image or click on the image to visit the host site.