Day Six of the Games marked a distinct upward tick in success for Team GB, with the medal haul now double what it was at the same stage in Beijing, primarily due to our Nation’s prowess in what Michael Johnson, the  BBC’s charming American ex-400 metre Champion, terms the “sitting-down sports.” 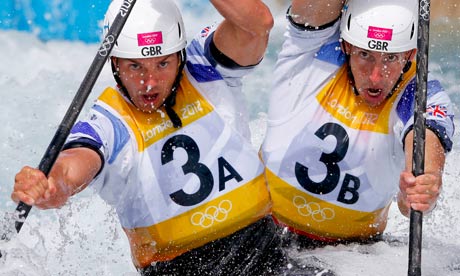 Tim Baillie and Etienne Stott paddle to Gold in the C2

There was a Silver in the Lightweight Fours at the Rowing, Gold and Silver in the C2 Canoe Slalom, Silver in Judo, Gold in the Trap-Shooting and Gold, plus a new World Record, in the Men’s Team Sprint at the Cycling, a fifth Gold Medal in cycling for Sir Chris Hoy matching Sir Steve Redgrave’s rowing tally to make them now jointly Britain’s most successful Olympians.

There should have been a second medal in the cycling had Victoria Pendleton and Jess Varnish not been relegated from the final of the women’s team sprint through infringing the changeover rules in their second qualification run.  They had also set a new world record during their first run, but it lasted only a short time before the Chinese pair eclipsed it on their way to a Gold Medal performance in that final, only to find themselves subject to relegation to Silver for a similar infringement.  Victoria Pendleton took the setback phlegmatically; her Chinese equivalent looked like she was chewing a wasp.

One of the great things about Olympic Games is that you discover all manner of unusual minutae about sports that you only watch once every four years.  For example, there are many different terms used for adjudicators, besides that generic term itself.  There are referees, umpires, judges, stewards and officials, as well as all manner of sub-genre utilising those terms.   There are also the various nicknames used within the sports themselves.  In American Football, the officiating crew are collectively known as ‘Zebras’, due to their striped jerkins rather than their ungainly gait when being pursued by an irate head coach.   In Soccer, County FA committee members are often referred to as ‘Blazers’ due to their ubiquitous clothing and stubborn resistance to change, while Will Carling infamously lost his England captaincy through referring publically to Rugby Union’s equivalents as ‘Old Farts.’

A few sports have more unusual terms, often derived from the language of the country where they originated; for example in Sumo the referee is known as a Gyoji.  Until yesterday, I was unaware that cycling was one such sport, their officials being called commissaires; what I also didn’t realise was that track cycling is one of the very few sports in this modern age where protest or appeal is entirely verboten.  This struck me as somewhat odd in a sport that probably embodies forward-thinking more than any other in this green and pc world.  London 2012 has been designed, from the outset, to represent that forward-thinking, with the emphasis on inclusivity, diversity and sustainability, but most of all on the Olympic ideal of fairness.

Cycling is a pastime that anybody, of whatever age, gender or creed, can participate in simply by buying just one piece of relatively-inexpensive equipment (although, once the bug bites and the Halfords catalogue invades the magazine rack, personalisation will soon multiply expenditure vastly).  Such participation is almost carbon-neutral, other than that created by the consumption of energy bars, and governments worldwide, particularly in the UK, have invested heavily in creating thousands of miles of special tracks and lanes for users to utilise in pursuit of their hobby.

So it was somewhat incongruous to hear a commentator mention, as the TV picture showed Team GB’s head of cycling Dave Brailsford being shooed-away from attempting to have a conversation with one of these commissaires about what was, essentially, a disqualification of his team, that there was little point in his doing so as the commissaire’s word was absolute.  It should be mentioned here that the judgement made was entirely correct, in both Team GB and China’s case, but had it not been, then competitors who had worked for years to attain their position would have been unfairly, and unilaterally, denied of the reward for that effort.  We saw in the Gymnastics the other day how, following a legitimate appeal, an incorrect decision was properly overturned to re-instate the Japanese Men’s Team into Silver medal position.   Some of the partisan crowd may not have liked it, as it appeared to effect their home team, but it was the right thing to do, and the right result.

One wonders what a similarly-partisan, but far more vociferous, crowd in the Velodrome might do if any of their idols were on the wrong end of an irreversible, but mistaken decision.   One suspects that the overriding principle of fairness would immediately be placed in jeopardy, so when the human rights records of some participating countries are being openly-questioned, it might also be worth extending such scrutiny to those applied in some of the participating sports.

Then there’s that term itself – commissaire.  It is pronounced ‘kommissar’, and for those of us with longer memories of less-stable times, that pronunciation brings a somewhat more-sinister image of repressive elites, self-serving bureaucrats and knocks on the door at midnight – the worst forms of jobsworthism.  And yet, isn’t that in itself some reflection of the less-savoury participants in the general pastime of cycling?   Admittedly they are a minority, but a significantly arrogant and visible minority who, when encountered, negatively affect the attitudes of people who would otherwise be supporters of their hobby.

We all use the roads in one form or another, and we all know how relatively vulnerable cyclists and pedestrians are when mixed with the more solid forms of transport.  That is why we created footpaths and, more recently, cycle lanes and cycleways.  We also know the laws and the highway code, which together advise us how to deal with the areas where these aspects interact – how to observe when and where pedestrians are allowed to cross a road in safety, or to avoid infringing the space of a cycle lane where cyclists can maintain sufficient separation from other traffic.  These are set essentially to allow vulnerable road-users to progress on their chosen journey unhindered and, more-importantly, in safety.  So why is it that this minority of cyclists appear to believe that laws put there to protect all road users, such as observing red traffic lights and no entry signs, or refraining from riding their vehicles on pedestrian footpaths, do not apply to them?

I always had a great deal of time for cyclists.  I had been one myself for many years as a youngster, even progressing to being a cycling-proficiency instructor for a few years.  Then last year, whilst walking to watch a Test Match at the Oval, I was nearly mown-down at a busy nearby junction by a cyclist.  I was walking, with several others, across a light-controlled pedestrian crossing which had been showing green in our favour for long-enough for us to have passed the halfway point of the crossing, when a bicycle flashed past just a couple of feet in front of us, travelling at easily the 30mph speed limit.   That was unsettling enough, but it was the realisation afterwards that to achieve this, he had obviously run the red light on the opposite side of the junction, and come across four lanes of busy moving traffic at that speed before he had even reached our position.

As tends to happen in such circumstances, the first reaction was for us to yell after him as he sped-off down the road.  The only acknowledgement we received was a flipped-finger behind his back which, I suppose, is the type of reaction one might expect from a potential kommissar.  Since that incident, I have taken more notice of what cyclists are doing, and have observed, to my surprise, that such disregard for the law, and their own safety, is no longer unusual.  It has to be said, however, that nearly every one of the two-wheeled felons I have seen are clearly serious riders, often dressed in the coloured racing gear of their heroes, but always riding top-end machines.   Yet one never seems to see any report of one of them being put up before the beak.

With so much high-profile support from leading national politicians, some of whom were watching Sir Chris win that fifth gold medal yesterday, one might hope they might also influence more conformity in their fellow riders.  If not, as those same politicians often promote self-regulation as the solution to such ills, maybe the time has come for the Sport of Cycling itself to set an example, if not by renaming its officials, then at least by dragging itself into this century by allowing appeals and protests against their decisions.  Who knows, that may just influence some of their less-desirable participants on the roads to themselves be more inclusive with regard to other road users.