Which is why Bernard hatched an escape plan that may not have been as complex as some of those in the annals of Colditz or Stalag Luft III, but was nevertheless just as daring. He simply pinned his medals under his coat and told the staff that he was going out for an early morning stroll. Then, having enlisted a lift to the station from a friend, he made his way to Portsmouth to board a ferry for Normandy, where another veteran bound for the D-Day 70th Anniversary celebrations took Bernard under his wing.

When they arrived in Ouistreham later that evening, his new-found buddy contacted the care home, by then in a flat spin looking for their missing resident, and advised them that Bernard would be home ‘when he was ready’. When reporters tracked Bernard down on the return ferry journey last night, he had acquired an escort of serving Paras; when asked if he would be in trouble, Bernard replied: “I hope not, but I may have to walk in backwards just in case they want to boot me straight back out again!”

The former Royal Navy Mechanician was just eighteen when his ship set sail that June morning in 1944 on the short 30-mile trip across the channel. His story seventy years later sums-up the courage and determination of the generation that made that voyage, many of whom didn’t return. Thankfully, one close to me did return, otherwise I wouldn’t be here today writing this blog.  Were my father still with us, I would doubtless have been writing it having made the trip to Arromanches with him.  He did live long enough to celebrate the fortieth anniversary in Portsmouth in 1984, along with a number of his old buddies from the local branch of the Africa Star Association.   Other than the odd amusing anecdote, they never really talked about their experiences, well not in earshot of my generation anyway. It’s as if, having saved us all from the potential tyranny threatening them all those years back, they felt they still needed to shield us from the horrors of doing so. Or maybe they simply wanted to forget it themselves – who knows what memories those ceremonies yesterday stirred for the dwindling numbers still able to attend.  As their song goes: Pack up your troubles in your old kit bag, and smile, smile, smile.

I still have my Dad’s old kitbag, and it did contain some troubles. I never asked the difficult questions when he was alive, it always felt not quite right to do so, but as a curious soul I have researched parts of his story when history has gently nudged me to. But I have never sought to intrude upon it, just allow it to find me when it was ready.

Like the time my eldest daughter and I dropped-into Duxford on one of her end-of-term trips home from University, to have a look at the museum there. We didn’t expect to find the newly-opened D-Day Exhibition, with it’s huge map, so we decided to see where and when her grandfather had landed. I already thought I knew the where, and I had always had the impression that the when was a couple of days into ‘the big show’. So it was a shock to find, when the appropriate button was pushed and the light showed his unit’s location, that the time read 7.47am on the 6th June. Of course, I should have realised that a reconnaissance unit would more likely be at the front, rather than further behind, but zero-hour plus 22 minutes was not exactly what I had visualised. The location was as expected, but no longer of significance – it was the timing that hit home.

A trip to Arromanches the year after brought a further revelation, when records showed that his unit did not arrive on Sword Beach, as the battleplan-based Duxford map had shown, but had come ashore on Juno, with the Canadian forces. Whether this was a last-minute change of assignment, or simply the confusion of battle, I am yet to ascertain. But it added yet another twist to his remarkable story. Dad’s Reconnaissance Squadron in Egypt, with one of their ‘Honey’ Tanks. Dad is front, second left

Dad was a Regular, having enlisted in the 8th King’s Royal Irish Hussars in 1936, at just 19 years of age. When the war began, he was already stationed in Egypt, and his unit became part of the Eighth Army. Their vehicles were American reconnaissance tanks, nicknamed the Honey but whose official designation was the M3 Stuart Mk.1. Dad would be in these all the way through the North African campaign, including El Alamein, right up to VE-Day.  Unlike so many like Bernard, who were still teenagers, when Dad went in on D-Day he was a hardened veteran of eight years’ service.  In the year or so after D-Day, his unit fought their way through France, Belgium and Holland finishing on May 8th 1945 in the North German city of Hamburg.  That may have been enough of a war for any unit, but the Army wasn’t finished with them there, instructing them to paint their tanks, then trundle the 150 miles south to Berlin to take part in the victory parade.

As a boy, I overheard the odd sentence or two from chats with his old comrades at home, but never enough to get a full story. There was the time Dad began to relate how coming over a rise to meet a German Tiger tank coming the other way focuses the mind somewhat.  The Honey was a nimble little vehicle, but could never be a match for the cream of the German Panzer Divisions. I never heard the end of the story, so I didn’t know where the incident had occurred; it was only years later that I discovered that Dad’s unit was at Villers Bocage.

Then there was the reference to liberating a PoW camp deep into Germany. Again, the story was cut-off so no name was mentioned, but later I read a history book that named Dad’s unit as one of the first to arrive at Stalag XIB. That such horrors must have become almost routine by that point in proceedings perhaps explains the reticence mentioned earlier amongst that entire generation, who showed yesterday that, even now all those years later, they are still the understated heroes to whom we owe so much.

So it’s right that Bernard Jordan was back in Normandy yesterday to receive the accolades, instead of being confined to barracks. Apparently, his reaction when he got there was quite simply: “All of this for us?” Yes Bernard, all for you, especially as you still instinctively know how to befuddle the jobsworths who pursue their own five-minutes of fame by all the wrong methods.

And for all of your comrades as well, whether still with us or not. We will never forget you and our task, much more simple than yours was, is to ensure that neither do future generations. 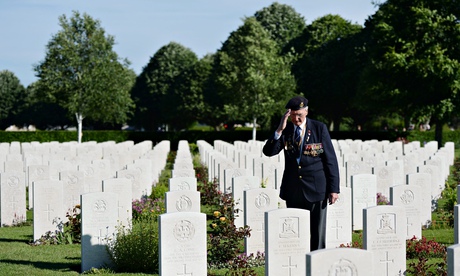 The final word on this is courtesy of the BBC.  I am often critical of that organisation, but sometimes they do get things so absolutely right. Which is why the playout on their evening highlights programme was so apt in the circumstances.    Accompanying those memorable pictures of veterans, like Bernard, enjoying their day in the sun was the eponymous song from the Forces’ Favourite – and my Dad’s – Dame Vera Lynn, which ends with the line: