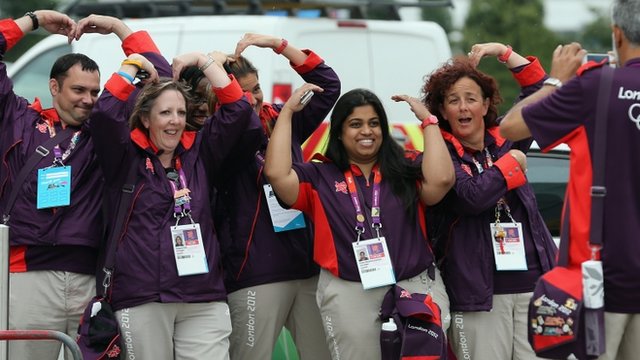 Today we were told that rail fares will be going up, that the Eurozone is almost in recession and that 54% of people think the Olympic spirit will be short-lived.  The first of those subjects was delivered with a technique that had been temporarily-retired for the last two weeks – the ratchet.  For those of you unfamiliar with this journalistic device, it is the way that a report can give you bad news, worse news and downright-depressing news all in one short sentence.  Todays’ usage was on rail fares which, we were advised, were “… increasing by double the rate of inflation, with most commuters paying over 6% extra, and some more than that.”  But let’s just analyse that a moment.

Rail fares have been allowed to increase at 3% above inflation for a number of years, to provide investment for the industry.  The increase has to be announced at least four months in advance, to allow commuters time to make the necessary adjustments, and is always based upon the RPI figure for July each year.  That figure was announced today.  So the story was set-up even before it was promoted to number one slot on the midday news – inflation has been less than 3% for some time, so if 3% can be added to the inflation figure, it is bound to result in an increase “double the rate of inflation.”  As it turned out, the RPI for July was 3.2%, add 3% to that and you end up with a figure of “more than 6%.”  All that you then need, if you’re a lazy hack at the Beeb, is to add the third click of the ratchet by the stock-phrase “and some will go up by more than that.”

Exactly where the justification comes for that last assertion is not mentioned, but then it doesn’t need to be.   If we complain about its use to the BBC (and there’s a whole other blog that can be written on that subject!) all they need to do is then find one fare that did increase by more, and the statement is justified – they don’t need to find it beforehand.  So let’s not try to figure-out exactly which fares they were talking about, just accept that all journalists do as little research as they possibly can when cobbling together non-news into a headline sensation.  Most rail-commuters will already have been aware of what to expect, as they know the timetable involved.  Just like the so-called spontaneous protesting commuter filmed handing-out flyers in front of a station in Glasgow – flyers that were not swiftly thrown together with a felt-tip and fifty-or-so photocopied on the way to work, but so glossily designed and printed in their thousands that they would have to have been planned and prepared weeks ago.

Next we were treated to a multiple-part presentation on why the Eurozone is going to hell in a handcart.  There was nothing new in this presentation, except for some of the presenters, it was the same old same old we had been fed last month when the growth figures were published, and the month before that, and the month before that, and …  In other words, another auto-story generated through today being the day that the monthly figures were published.

But the third story, the one about the feelgood factor, now that was slightly different.  We were told that, according to a survey, 83% of people think the Games had a positive effect, 80% think they made us more proud to be British, but 54% think the effects will be short-lived.  An interesting variation of the ratchet here with two positive clicks, followed by a kick to the collective solar-plexus.  The news was delivered to us by James Pearce, one of David Bond’s evil games-trolls from the sports newsdesk, standing in his black suit in a deserted Olympic Park, just to re-inforce the depressive mood.  The only thing they forgot was to roll a tumbleweed across in the background at the end as he turned to leer into the camera and cackle evilly “OK, you’ve had your fun, now you’re ours again!”

Once again, perhaps, we should look behind this for a moment.  Who did the survey?  NOP – so obviously a reputable organisation.  How many were interviewed? Just over a thousand – so not the biggest sample, indicating a quickly-done project.  When was it conducted?  Between Friday and Sunday – so up-to-date.  Who commissioned it?  BBC News.

Ah, there we have it!  So while their own sports department was beaming all of those wonderful pictures across the country last weekend, showing people actually enjoying the feelgood factor, the BBC news department was spending thousands of licence-payer pounds on commissioning a survey designed to pop our purple and orange balloons as quickly as possible thereafter.  The full question that was asked, sausage-sandwich style, was: “Thinking about the effect the Olympic Games will have on the UK overall, do you think that any effect on the UK will be long term, any effects will be short-lived, or will there be no effect at all?”  So already a question with a loaded ratchet – only one of the optional answers can possibly be positive.  That it received the assent of more than a third of those questioned (36% thought it would be long-term) was conveniently ignored in James Pearce’s report, as it obviously went against the pre-programmed negative angle.

Which is where the BBC really needs to start addressing why it wastes so much of our money on trying to make us feel bad.  They can bang-on continually about the likes of NewsCorp having their own agendas, but those are commercial companies – they can spend their money on reporting with any bias they like, because if they get it wrong they will go out of business.  The BBC will be there, at least they hope it will, forever – because we are daft-enough to pay them over a hundred-quid a year even when we have to pay hundreds more to receive our programmes via commercial satellite.

So it is time for the BBC News Department to become as unbiased, as politically-neutral, as they constantly-spin at us when the licence fee comes up for negotiation.  It is time for Mark Thompson to start weeding-out the doom-mongers and trolls, and the best place to start is with that manicly-depressed sports newsdesk!